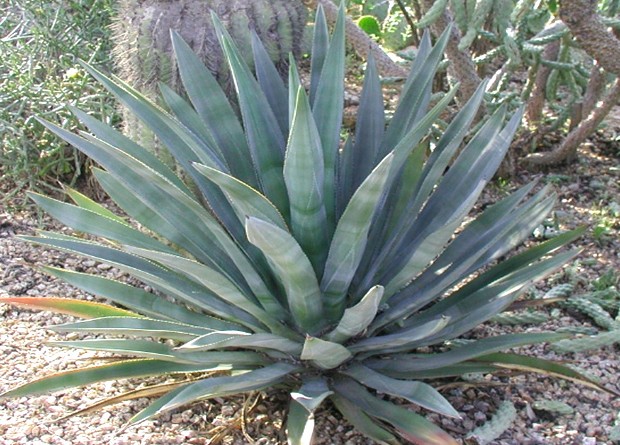 and can be a dynamic addition to any landscape.  They are some of the most interesting, popular and beautiful desert plants. These succulents have a symmetrical rosette of stiff pointed leaf-like spines that come in a variety of sizes and colors. They are known for their geometrical patterns and low maintenance.  It is common to mistake agave for cacti. They are not related to cacti or aloe, despite their similarity in appearance; Yuccas however, are a close relative to Agaves, both being succulents! 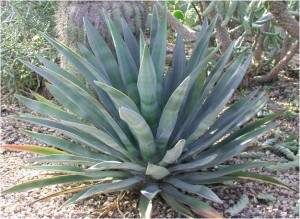 Because of its desert adaptations, most Agave love the sun

and require direct to indirect light. It is important to always provide Agaves with well drained soil, as root rot can be a pesky problem.  Agaves are also successful as potted plants indoors as well as outdoors.  These plants thrive in hot dry climates like Arizona, and are a perfect fit for Xeriscaping and low water maintenance!  While this succulent is very good at surviving on little water, it is best to consider a unique water program for each individual species.  Overall, be sure to let soil dry completely between waterings.  Agave leaves will appear fleshy and plump with increased watering and some require much less than others.  In general, they are not extremely cold hardy, and may need covering or protection from heavy frosts.

Agaves are perennial plants, and each individual rosette grows slowly to only flower once in its lifetime.

They are commonly referred to as the “century plant”.  This name is often a misconception, because most Agaves produce a flowering shoot after 10 to 15 years, not 100.  Agaves produces a tall stem from the center of the plant that bears a large number of tube-like flowers. These flowers are a fantastic way to attract hummingbirds and butterflies into your yard.  During the years before producing its flowery “mast”, Agaves store water and nutrients in its sword-like leaves to store up all the energy that it takes to grow.  After the fruit is produced the original plant dies, but base shoots often become new plants, perpetuating the presence of this beautiful and intriguing plant.

Many ancient civilizations considered Agaves to be a sacred plant.

The Agave plant was an important food source for southwestern Indian tribes including the Apache, Comanche, Mohave, and Paiute, and nearly all of the northern and central Mexican tribes.  It also served many other versatile purposes as well: its tough leaves’ fiber was used for roof thatching, clothing, ropes, and (among the Aztecs) pulp for paper.  Agave sap and juice were used as medicinal herbs by many tribes.  Additionally, some tribes made the fermentation of Agave juice into alcoholic beverages such as pulque, mezcal (or mescal), and tequila.

With all Agave, there are four parts of the plant that are useful and edible: the flowers, the leaves, the stalks and sap.  Each Agave can produce up to a pound of flowers during its final bloom season. The stalks are sweet when roasted, and can be harvested like sugarcane. Agave nectar is collected from the sap in the leaves and used as a rich sugar substitute.  Today, Agave Americana is one of the most familiar species of Agave, and they are commonly used to make syrup and sugar.  Agave Tequilana, also known as Agave Azul (or Blue Agave) is used in the production of  modern tequila.  Several Agave species also yield fiber, which have been historically used for basket and rope weaving.  As a cautionary warning, some Agave sap has been reported to be a skin irritant, and most Agaves do produce a small sharp spine of some sort on the tip of its leaves.

Throughout time, Agaves have proven to be an essential part of desert living. 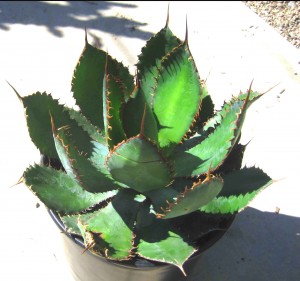 They are an aesthetically pleasing choice for your landscape, and require little watering to saving you notably on water bills.  The diversity between the species in the Agave family can offer you many colors, shapes, sizes and textures to choose from.

The experts at Envirogreen are prepared to help you pick out the best Agaves for you, your family and your environment.